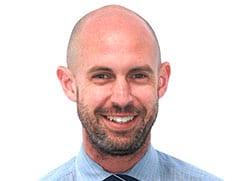 Josh Taaffe is a specialist trial lawyer and the in-house Counsel for the firm. He has more than ten years experience as a criminal lawyer, and has been appearing in trials before Judge and Jury since 2009. Josh is a partner of the firm and is an Accredited Criminal Law Specialist. Josh is the deputy chair of the criminal law section of the Law Institute of Victoria. Josh is based in our Melbourne office and appears in all Victorian Courts, at every level. Josh provides advice and representation for all criminal cases.

Josh Taaffe specialises in representing his clients at trial. The bulk of his work now involves defending clients who are pleading not guilty. This can mean defending clients in Magistrates’ Court hearings or running their cases in front of Judge and Jury.

Not every accusation is true and many truthful accusations are exaggerated or made up of a mixture of truth and lies. Josh Taaffe has many years of experience defending his clients at trial and helping the wrongly accused achieve the right outcome. For those who have committed a crime he assists his clients to plead guilty to only the appropriate charges, for what they really have done. For those who are pleading guilty he helps put the full story before the Court. A sentencing Court needs to be informed – not just about what happened but why it happened and about the entire story of his client’s life.

In this role of in-house counsel, Josh works as the advocate as part of a team with other lawyers from our firm. This role involves examining and cross-examining witnesses, addressing juries and making legal submissions before Judges. Josh has been studying the skills and techniques of advocacy for many years and putting them to work for his clients.

Josh has extensive experience as a defence advocate, and appears regularly as a Barrister in County Court jury trials, pleas of not guilty, and contests as well as bail applications, committal hearings, appeals, and pleas of guilty.

As a solicitor Josh has specialised in handling complex matters, such as murder and terrorism trials, including State and Commonwealth Supreme Court trials. Josh acted as Abdul Nacer Benbrika’s criminal lawyer in Melbourne during Victoria’s first Commonwealth prosecution of terrorism offences. The trial was one of the longest and most complex to ever come before the Courts.

Read more about judgements in the R v Benbrika trial.

Josh acted for Hugo Rich, formerly known as Olaf Dietrich in a trial in the Supreme Court that lasted nearly five months. Rich was charged with the murder of a security guard in the course of a 2005 armed robbery. The armed robbery was planned to intercept the delivery of money by an armoured van to a bank in the Blackburn North shopping centre.