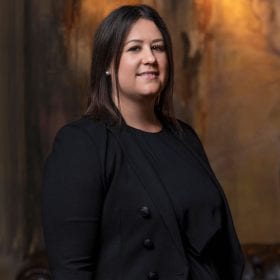 Andrea obtained her Bachelor of Laws from Murdoch University in 2005, having previously completed a Bachelor of Commerce at Curtin University (majoring in Marketing and Electronic Commerce) in 2002.

She was admitted to the Supreme Court of Western Australia on 4 September 2006 and to the High Court of Australia in 2011.

She successfully completed a Master of Laws (Applied Law majoring in Family Law) (LL.M) with the College of Law Australia in 2014.

Andrea was named by Doyles Guide as one of Perth’s recommended Family and Divorce Lawyers in 2017 and 2018.

In November 2015 Andrea successfully completed the National Training Program for Independent Children’s Lawyers conducted by the Family Law Section of the Law Council of Australia and National Legal Aid.

Andrea is also the secretary of the Family Law Practitioners’ Association of WA having previously served as the treasurer and chair of the sponsorship committee. She is also a member of the Law Society of Western Australia and Women’s Lawyers (WA). She is the current secretary of the St Mary’s Anglican Girls School, Old Girls Association, previously holding the position of Communications Coordinator.

Andrea is also an active networker and is currently the Chapter President of her BNI chapter, Western Edge.