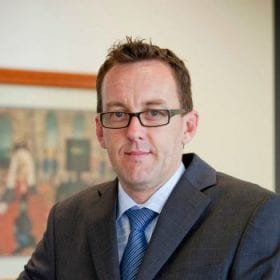 Darren Mahony resides on the Gold Coast with his wife and two children. Darren is originally from Toowoomba where he attended St Joseph’s College. He received a TE score of 990, was awarded Dux and was well known for his academic and sporting achievements.

Darren then completed his articles at the oldest law firm in Queensland, Flower and Hart in Brisbane City.

Darren then found his calling in criminal law and advocacy, which complimented his profound sense of fairness and justice.

Darren was admitted to the Supreme Court of Queensland and the High Court of Australia in 1994.

Darren is a recognised expert in relation to Shaken Baby Syndrome and Munchausen’s Disorder, which has lead to significant appearances in child safety matters.

Darren has been involved in many Sports Law investigations into both sporting clubs and individual players; including complex investigations by ASADA.

Darren in partnership with Mr Jason Jacobson continue to achieve successful results for all clients through their focused effort and experience.