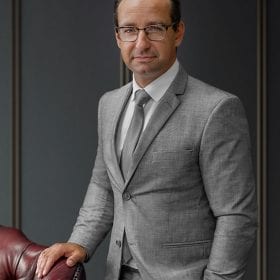 Since his admission to practice over 19 years ago, Michal has spent most of his career working in the field of criminal defence and traffic law. In that time he has risen to the position of Director and Trial Advocate, making him one of our most senior criminal and traffic lawyers. His passion for and dedication to the law and the interests of his clients are reflected in his career achievements.

Michal is a Law Society Accredited Specialist in Criminal Law; he is frequently invited to present papers on various aspects of criminal law at seminars for other lawyers; he is currently the deputy chair of the Law Society’s Criminal Law Committee; is a former lecturer in the Traffic Offenders Intervention Program and has been called upon by various media organisations (such as the ABC, 9News, 7 news, Prime News and the SBS) as a commentator regarding issues concerning criminal and traffic law. These activities place Michal at the cutting edge of developments in Criminal and Traffic law.

"Michal Mantaj and the team at Conditsis have been unwavering in their support for me and my family. They were on my team, not just because I was employing them but because they believed in my innocence. I was falsely accused of sexual assault, at first I believed I would be spending time in prison but Michal represented me fiercely in local, district and supreme court and I was found innocent after a 4 year legal battle. With all the ups and downs of the justice system the Conditsis team did everything within their power to see truth prevail. I am beyond thankful for the hard work of Conditsis and would recommend their services to anyone in need of passionate and highly skilled legal council. Thanks Conditsis."  Tim

"Such a friendly, professional, 24/7 support. As much u can say , mr Micheal he is the best" EI

Fined for eating a Mars bar: Why drivers could be docked $337 and lose five demerit points for having a snack behind the wheel