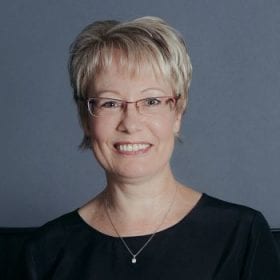 Sharon graduated from the University of Adelaide with a Bachelor of Laws in 1986.

Following graduation, Sharon was employed by the Australian Taxation Office for a 2 year period under their Graduate Trainee Programme.

Sharon undertook a Graduate Diploma in Legal Practice in 1989 and was admitted as a Barrister and Solicitor of the Supreme Court of South Australia and the High Court of Australia in December 1989.

In 1990 Sharon worked for former Senator Nick Xenophon for a 12 month period.

In 1991 Sharon commenced employment with Camatta Lempens where she practised in family law and assisted the Senior Partner, Franco Camatta in commercial matters. Sharon was employed by Camatta Lempens for 9 years and during that time became the Senior Family Lawyer at that firm.

During her employment at the Court, Sharon has received extensive and on-going training in the many legislative changes that have occurred in family law.

As part of her duties as a Registrar, Sharon has conducted mediation on a daily basis and has had extensive and ongoing training in areas such as dispute resolution and negation techniques. Sharon offers private mediation in family law matters in addition to practising as our senior consultant.

Sharon returned to private practice in 2012 to establish her own boutique family law firm, practising exclusively in family law.

Sharon understands that separation is an extremely stressful and difficult time and her aim is to provide you with the necessary information and support to enable you to make informed decisions and to finalise your matter in a timely and cost effective manner.

Sharon is a member of the Law Society of South Australia and the Family Law Section of the Law Council of Australia.